Gov. Obaseki Thanks Gov. Wike of Rivers State for Being a True Brother to Him When Edo State Governor Was Pushed Out from the Ruling Party, APC

The off-season gubernatorial election in Edo State on September 19, 2020 was decisively won by the incumbent governor and the opposition party candidate, Godwin Obaseki. Governor Obaseki contested his first tenure and won as the APC candidate. The governor, however, fell out of favor of the ruling party’s bigwigs in his state and Abuja for reasons that are nor publicly known. Obaseki was, therefore, denied the APC ticket to contest for reelection in 2020. The altercation that emanated from this development culminated in the governor’s suspension from the ruling party thereby making it impossible for him to partake in the party’s primary contest for the 2020 off-season election. This perceived betrayal left by his own party compelled Governor Obaswki to seek solace in the arms of the opposition PDP.

This was when Governor Ogaseki found himself drenched in a heavy rainstorm. He recollects in this video that Governor Wike of Rivers State stepped up big-time for him as a true brother. Wike was instrumental for rescuing the abandoned Edo state governor by facilitating the latter’s full embrace by the opposition PDP. From Obaseki’s testimony, Governor Wike mobilized the assets under his control and threw them behind the Edo State governor’s reelection bid as a PDP candidate. Governor Wike was encouraged when it became clear that the PDP stalwarts in Edo state opted to throw their weight behind Obaseki’s bid by withdrawing their candidacies during the primary contests. With the unity of purpose with the party o9peratives within Edo State, it was much easier for any outside assistance to mean much on the ground.

Governor Obaseki led a delegation to the Rivers State House, Port Harcourt to offer heartfelt thanks to Governor Nyesom Wike for being a very good neighbor to Edo State and a good brother to Governor Obaseki. It is courteous to show appreciation to a benefactor who stepped in time of uncertainty to rescue a brother in great need. Gov. Obaseki attributes this gesture to his Bini ancient code of conduct. Of particular significance is that all the six states of Nigeria’s Southsouth geopolitical zone are now consolidated within the opposition PDP. It will be easier for all the state governments to collaborate on sundry matters, going forward.

Many have cautioned that the declaration of Godwin Obaseki as the winner of the Edo governorship election by the INEC may not be the end of the story, especially if the Judiciary is brought into the mix as was the case in the nearby Imo State. During the 2019 general elections, the opposition candidate, Emeka Ihedioha, won the governorship post by a wide margin over the nearest rival in the race. The victorious governor was promptly sworn into office and he took all the reins of power as he settled into governance. But the electoral tribunal judgment was appeal all the way to the Supreme Court by the failed candidate of the ruling party. In one of the most bizarre electoral judgments in the country’s history, Governor Ihedioha’s election was annulled by the Supreme Court which, in its ruling, ordered that the ruling party’s candidate, Hope Uzodinma, should be sworn in as Imo state governor. During the 2019 general elections, Uzodinma was the 4th in the INEC polls result sheet.

The million-dollar poser is will the Ihedioha’s fate visit Obaseki? In today’s Unitary Nigeria, all things are possible, especially the bad ones. In the same bloody 2019 general elections charade, the opposition presidential candidate, Atiku Abubakar, won more votes cast at the polls. But, with the usual intervention of the newly reconfigured Supreme Court, Muhammadu Buhari is still president today, serving his second tenure.

The rational way to look at the Edo governorship election is that the Edo people seem to be of a different breed from the Imo electorate. The Oba of Benin is a galvanizing force in Edo State which is lacking in Imo State. The ruling party did all it could to defeat Obaseki at the first instance, knowing too well that any attempt to repeat the judicial heist through the Supreme Court might be vehemently resisted within Edo State. Furthermore, all states of the Southsouth geopolitical zone are now consolidated behind Governor Obaseki to the extent that did not apply to Governor Emeka Ihedioha. 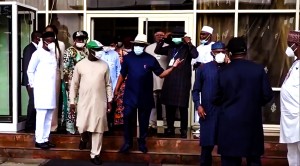 Gov. Wike and his fellow opposition governors in the Southsouth may now wish to extend their hands to their neighbors in the Southeast. Unitary Nigeria operated with the imposed fraudulent 1999 Constitution is the obstacle to the unleashing of the development energies of our part of the world. The antithesis of today’s Unitary Nigeria is the building of regional solidarity that approximates the Broken Map adopted by the LNC/MNN alliance partners adopted at the Lagos Conference of June 30, 2011. We hope that Wike can replicate what he has done in the Edo off-season governorship election in the Southeast states of Anambra and Imo in the coming months and years. Building regional solidarity can keep out the external foe and better prepare the inhabitants of the Lower Niger for the self-determined future that we deserve.