Dangote Is Not Your Friend: Monopoly Concessions End Up Hiking Prices & Fleecing the Poor Consumers

In 1838, Carl Knorr recognized a problem with cooking in Germany. People wanted their soups to have certain flavors and would spend hours drying, grinding, boiling vegetables and other spices to add to their meals. So he created the Knorr brand. You recognize the name because you have used a Knorr seasoning cube before. Today, Knorr products are sold in nearly 90 countries around the globe.

To get to this level of patronage, the Knorr brand had to innovate and make the gains of simply using a seasoning cube more than the gains of making the seasonings by individuals. At this period, people had more time than money, so to make the purchase of these products attractive, Carl had to invest in creative methods to make the products as cheap as possible. Obviously, the innovation methods worked. In Nigeria today, you can get a cube of Knorr seasoning for as low as N20.

Why is this story important? Because people no longer understand what is meant when we say that while an imperfect system, the market system remains our most effective weapon in fighting poverty.

This correction is important in light of Dangote Group’s tacit endorsement of the government’s ban on rice importation. Calling attention to itself, Dangote says its farmlands in the country will enable Nigeria to export rice.

Yet this is not the first time Dangote is supporting the ban on imported products. In the past, he had asked for the ban of Tomato. But the peak for me was in the exclusive interview with Financial Times in July 2018. He said,

Did your heart skip at the mention of cement? Well, mine did.

Of course, it makes no sense to import what we can produce. So the question is, what is stopping us from producing instead of importing. Until those constraints are identified and dealt with, banning would mean making life more difficult for Nigeria.

And this has happened before.

For some people, the production of cement within the shores of Nigeria is a thing of pride. They point out to a Nigerian producing for Nigerians as the highest form of patriotism. But policies should not be judged by the “feel-good” factor; instead they should be measured by their impact on the people.

It would be recalled that the Nigerian Government, in its attempt to boost local production, placed a ban on importation of cement in 2001. President Obasanjo seeing that the objectives were not being met, lifted the ban in 2007, only for the ban to be placed back again.

Give or take, we have had 18 years to evaluate the impact of the ban. The overwhelming consensus is that Nigerians pay among the highest prices for cement in the world. A quick search on Konga shows a 50kg bag of cement costs $7, while a 2016 World Bank report (Page 61) on competition in Africa reveals that the average global cement price is around $3.4. Almost two decades after, Nigerians pay double the global prices for the price of cement. 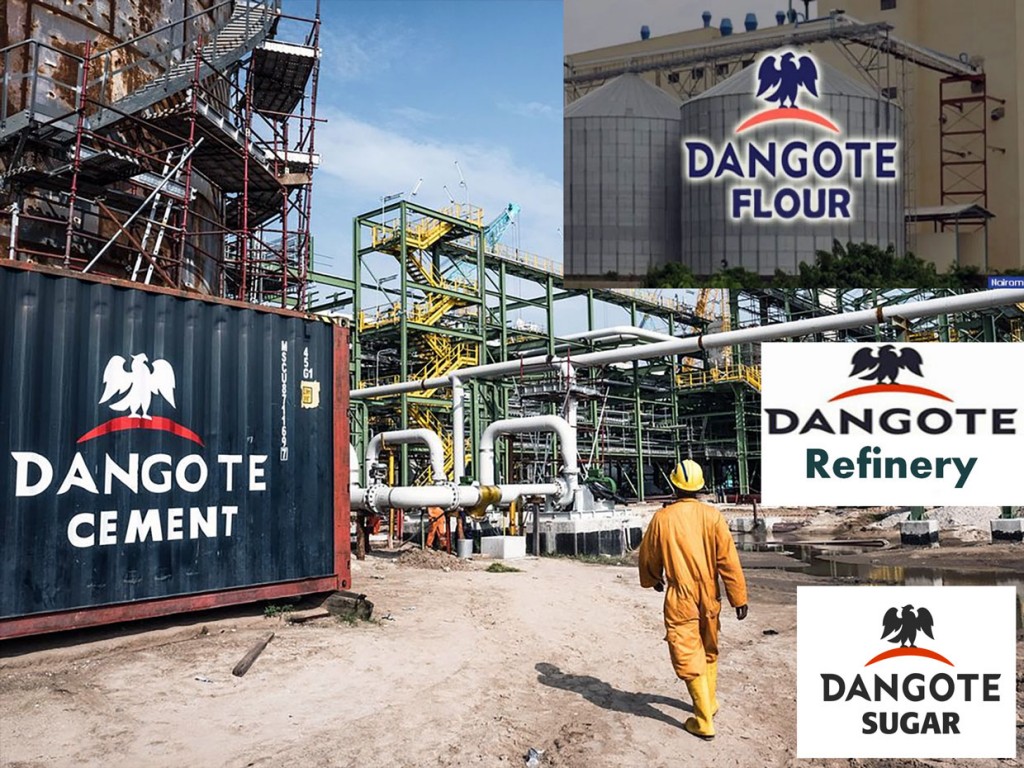 Dangote industries engage in the manufacture of many consumer goods, which are, otherwise, imported to meet domestic needs. The conglomerate lobbies the government for exclusive rights to supply essential consumer goods. Monopoly control by Dangote often causes an escalation in costs to poor domestic consumers.

I hear you retort that it’s the tough business environment that has made things, cement inclusive, so expensive. And that would be true for cement if the profit margin is not exorbitant. In 2017, a Bloomberg Intelligence report showed that the average global profit margin for cement companies was 17%. For the Dangote Group, the profit margin was 42%. That’s more than twice. I just checked the result for 2018 and the profit margin has shot up to 64%.

If conditions are difficult, then the profit margin should shrink, not explode. It goes without saying that it’s Nigerians who are paying through their nose when they could easily get the product for much lesser.

This World Bank report, on page 64, shows that Dangote has been granted exclusivity to materials, including limestone used to produce cement.

Nigerians don’t understand that when they mention cement production in the country as a pointer to why banning things is good. They are indirectly encouraging a system of exploitation.

Every single time a Nigerian businessman tells you Nigeria should ban the importation of something without calling out the problems which necessitate importation of that product in the first place, know that they are thinking of enriching themselves at your expense.

THE COST OF EXPENSIVE CEMENT

This importation of cement comes at a price. Housing.

According to the Federal Mortgage Bank of Nigeria (FMBN), Nigeria’s present housing deficit in 2019 stands at 22 million. This year, the United Nations called Nigeria’s housing crisis the worst in world.

If cement is a critical component in building, and the Nigerian market is dominated by Dangote Cement, which has about 70 percent of the market, then it is safe to say that Dangote contributes immensely to the housing crisis in Nigeria.

HOW WE DON’T PRACTISE CAPITALISM

If there’s anything capitalism is good for, it is a reduction in the prices of commodities and services. The richest capitalists in history got their wealth from mass production of goods for the masses. Henry Ford made a car so inexpensive that three months of wages became enough for Americans to get a brand new car. You must have seen the image of IBM 5MB hard drive costing $35,000 annually in 1956. Thanks to capitalism and the crashing of prices, you would consider it useless if gifted in this age of cheap smartphones. Everyone involved in making that 5MB Hard drive obsolete became stupendously rich. Capitalism rewards value addition.

It is no longer capitalism when you manipulate a system or collude with the state so you can fleece people off without adding value. That’s not capitalism. We have a name for it: Cronyism.

Nigercem, Nkalagu, Ebonyi state, is the first cement factory to open in Nigeria’s 1st Republic, more than fifty years ago. It was abandoned during the 30-month civil war and has never been rehabilitated or restored to its former glory.

BUT THE CEMENT BAN CREATED JOBS…

But Dangote employs people, you say…

Yes, he does. According to the Company’s 2018 Annual Report (Page 38), Dangote Cement has 17,447 direct employees. But I have always made the analogy of fuel scarcity to explain the irrationality of this argument. Hundreds of jobs across the country are created during periods of fuel scarcity. Several young men who would otherwise be sitting under the bridge are gainfully employed, moving jerrycans and easing the pains of car owners. So do you think it makes sense to protest for the government to make available regular fuel scarcity episodes?

Of course not. It’s the same reason it makes no sense to praise the tens of thousands of jobs created by Dangote Cement cornering the market and making Nigerians pay through their nose when millions of jobs are waiting to be created by allowing genuine competition in the cement industry and its attendant effect on the construction industry. Think of the businesses and employment waiting to be created if we are to bridge the 22 million housing deficit in Nigeria.

Our situation is dire. More than ever, we need entrepreneurs whose creative insights would unleash the potential in our economy. People like Dangote stand in the way of that.

A few days ago, I finished reading Duncan Clark’s: “Alibaba: The House that Jack Ma Built” and just like Ratan Tata, Hugo Boss, Paul Getty and my favorite entrepreneur, John D. Rockefeller, the only way these ones got rich was by making otherwise expensive commodities cheap for the masses. This is the blueprint of capitalism.

If you ban wheat, milk or vegetable oil today, as being advised by Aliko Dangote, the price will simply get beyond the reach of the masses, just like it’s happened to rice and cement.

WHY DOES BANNING WORK ELSEWHERE AND NOT IN NIGERIA?

First of all, you don’t always need to ban to be competitive in the modern market. Nigeria banned fruit juice imports in 2002 and some analysts have pointed to the growth of the domestic juice production as proof that banning works. However, there are two ways to judge this policy:

On question 1, the Nigerian market will not be competitive. Remove the ban today and Nigerians will be attracted to the lesser prices of the foreign fruit juice products.

On question 2, we don’t have a strong export market. In fact, Ghana which did not ban imports makes five times more than we do in exports.

In other words, the ban has not helped the country improve its domestic production, especially when you realize that while we have banned imported packaged fruit juice, we still import enormous amounts of juice concentrates. Companies import juice concentrates, mix it with water, bottle them up and transport them to the various markets in the country. We have mastered the art of deceiving ourselves.

Import bans don’t work in Nigeria because the fundamental reasons why imports are necessary in the first place are still there. The headache of clearing goods at the port is so bad that the country loses $19 billion (5% of GDP) annually from the delays, traffic jams and illegal charges. It takes less time to go from Lagos to London (7000km) than to move from Apapa to Ojota (27km). As you know, the challenges of inadequate power and transportation infrastructure are still there. The security hurdles are still high. These all add up to the reasons imports are attractive.

An import ban is not a magic wand or formula. Until what makes import ban work in other countries are in place, businessmen like Dangote who tout import bans as shortcuts to sufficiency in anything are only planning for your pockets.