Crucial Fact You Ought to Know: A 232-Year History of America’s Fight Against Islam & Why It Is No Longer Taught in US Public Schools…

When Thomas Jefferson saw there was no negotiating with Muslims, he formed what is now the Marines (seagoing soldiers). These Marines were attached to U. S. Merchant vessels. When the Muslims attacked U.S. merchant vessels they were repulsed by armed soldiers, but there is more.

The Marines followed the Muslims back to their villages and killed everyone  in the village.

It didn’t take long for the Muslims to leave U.S. Merchant vessels alone.

English and French merchant vessels started running up our flag when entering the Mediterranean to secure safe travel.

Why the Marine Hymn contains the verse, “To the Shores of Tripoli “.

This is very interesting and a must-read piece of our history. It points out where we may be heading.

Most Americans are unaware of the fact that, over two hundred years ago, the United States had declared war on Islam, and Thomas Jefferson led the charge!

At the height of the 18th century, Muslim pirates (the “Barbary Pirates”) were the terror of the Mediterranean and a large area of the North Atlantic.

They attacked every ship in sight, and held the crews for exorbitant ransoms. Those taken hostage were subjected to barbaric treatment and wrote heart-breaking letters home, begging their governments and families to pay whatever their Mohammedan captors demanded.

These extortionists of the high seas represented the North African Islamic nations of Tripoli, Tunis , Morocco , and Algiers – collectively referred to as the Barbary Coast – and presented a dangerous and unprovoked threat to the new American Republic .

Before the Revolutionary War, U.S. merchant ships had been under the protection of Great Britain . When the U.S. declared its independence and entered into war, the ships of the United States were protected by France.

However, once the war was won, America had to protect its own fleets. 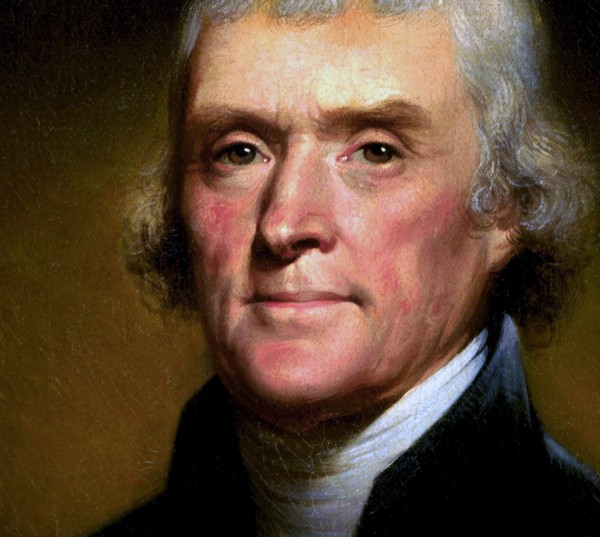 President Thomas Jefferson created the US Marines to accompany the Navy on its operations during the Barbary Wars.

Thus, the birth of the U.S. Navy. Beginning in 1784, 17 years before he would become president, Thomas Jefferson became America’s Minister to France. That same year, the U.S. Congress sought to appease its Muslim adversaries by following in the footsteps of European nations who paid bribes to the Barbary States rather than engaging them in war.

In July of 1785, Algerian pirates captured American ships, and the Dye of Algiers demanded an unheard-of ransom of $60,000. It was a plain and simple case of extortion, and Thomas Jefferson was vehemently opposed to any further payments.

Instead, he proposed to Congress the formation of a coalition of allied nations who together could force the Islamic states into peace. A disinterested Congress decided to pay the ransom.

In 1786, Thomas Jefferson and John Adams met with Tripoli’s ambassador to Great Britain to ask by what right his nation attacked American ships and enslaved American citizens, and why Muslims held so much hostility towards America, a nation with which they had no previous contacts.

The two future presidents reported that Ambassador Sidi Haji Abdul Rahman Adja had answered that Islam “was founded on the Laws of their Prophet, that it was written in their Quran that all nations who would not acknowledge their authority were sinners, that it was their right and duty to make war upon them wherever they could be found, and to make slaves of all they could take as prisoners, and that every Musselman (Muslim) who should be slain in battle was sure to go to Paradise.”

Despite this stunning admission of premeditated violence on non-Muslim nations, as well as the objections of many notable American leaders, including George Washington, who warned that caving in was both wrong and would only further embolden the enemy, for the following fifteen years, the American government paid the Muslims millions of dollars for the safe passage of American ships or the return of American hostages.

The payments in ransom and tribute amounted to over 20 percent of the United States government annual revenues in 1800.

Jefferson was disgusted. Shortly after his being sworn in as the third President of the United States in 1801, the Pasha of Tripoli sent him a note demanding the immediate payment of $225,000 plus $25,000 a year for every year forthcoming.

Jefferson let the Pasha know, in no uncertain terms, what he could do with his demand. The Pasha responded by cutting down the flagpole at the American consulate and declared war on the United States.

Jefferson, until now, had been against America raising a naval force for anything beyond coastal defense, but, having watched his nation be cowed by Islamic thuggery for long enough, decided that it was finally time to meet force with force.

He dispatched a squadron of frigates to the Mediterranean and taught the Muslim nations of the Barbary Coast a lesson he hoped they would never forget. Congress authorized Jefferson to empower U.S. ships to seize all vessels and goods of the Pasha of Tripoli and to “cause to be done all other acts of precaution or hostility as the state of war would justify”.

When Algiers and Tunis, who were both accustomed to American cowardice and acquiescence, saw the newly independent United States had both the will and the right to strike back, they quickly abandoned their allegiance to Tripoli.

The war with Tripoli lasted for four more years, and raged up again in 1815. The bravery of the U.S. Marine Corps in these wars led to the line “to the shores of Tripoli” in the Marine Hymn, and they would forever be known as “leathernecks” for the leather collars of their uniforms, designed to prevent their heads from being cut off by the Muslim scimitars when boarding enemy ships. 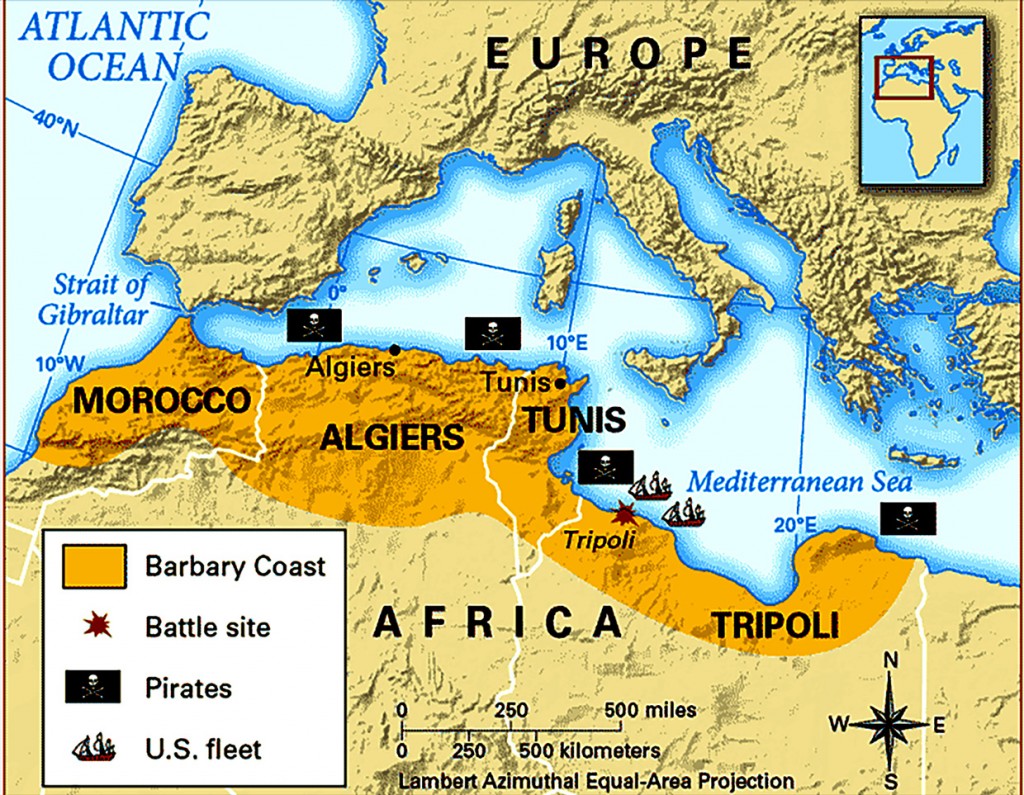 Islam, and what its Barbary followers justified doing in the name of their prophet and their god, disturbed Jefferson quite deeply.

America had a tradition of religious tolerance. In fact Jefferson, himself, had co-authored the Virginia Statute for Religious Freedom, but fundamentalist Islam was like no other religion the world had ever seen.

A religion based on supremacy, whose holy book not only condoned but mandated violence against unbelievers, was unacceptable to him.

His greatest fear was that, someday, this brand of Islam would return and pose an even greater threat to the United States.

This should concern every American. That Muslims have brought about women-only classes and swimming times in America at taxpayer-funded universities and public pools; that Christians, Jews, and Hindus have been banned from serving on juries where Muslim defendants are being judged; Piggy banks and Porky Pig tissue dispensers have been banned from workplaces because they offend Islamist sensibilities; ice cream has been discontinued at certain Burger King locations because the picture on the wrapper looks similar to the Arabic script for Allah; public schools are pulling pork from their menus; on and on and on and on..

It’s death by a thousand cuts, or inch-by-inch as some refer to it, and most Americans have no idea that this battle is being waged everyday across America. By not fighting back, by allowing groups to obfuscate what is really happening, and not insisting that the Islamists adapt to our culture, the United States is cutting its own throat with a politically correct knife and helping to further the Islamists’ agenda.

Sadly, it appears that, today, America’s leaders would rather be politically correct than victorious!