US Washington Post News Report: Fulani Ruling Aristocracy as a Relic from a Bygone Era

(The Washington Post article, which was the basis for this post, is published in full at https://goo.gl/UfJChi.)

The Emir of Kano, Sanusi Lamido Sanusi, may be sitting on a 1000-year-old throne, but his direct ethnic descendants have been at the helm for only 200 years. The city of Kano has been a major Sahelian trading hub since the Middle Ages. Commercial links with North Africa and the Nile Valley brought relative prosperity and fame to this ancient city. Until 1805, Kano was owned and ruled by Hausa kings who amassed immense wealth through trade in slaves and other commodities with North Africa and the Middle East. Although there was a rivalry between Kano and Gobir to the west (today’s Sokoto), the former had remained the dominant center for commerce for centuries.

The geopolitical landscape of the Nigerian Sahel changed irreversibly in 1805 AD when the ruling order in the vast territory was upended after a successful Islamist jihad led by a Fulani Muslim cleric, Sheikh Uthman Dan Fodio. The charismatic rabble-rouser mobilized his fellow tribesmen, who were Muslims and thus amenable to the call to jihad, to join the army that swept across the region under his command. The Hausa kings who had ruled this territory for centuries were dethroned, beheaded and their thrones were transferred to Fulani jihadist leaders to become the new emirs. That was when the incumbent Emir of Kano’s ancestors took over the throne of the ancient commercial city. Before this time, the Fulani thrived in a wide swath of territory that spanned the West African Sahel – from the Futa Jalon Mountains in the west to Sudan – as itinerant nomads who survived through cattle herding, slave trade, and raiding of host sedentary communities.

Fulani Control in an Hausa-dominated Territory 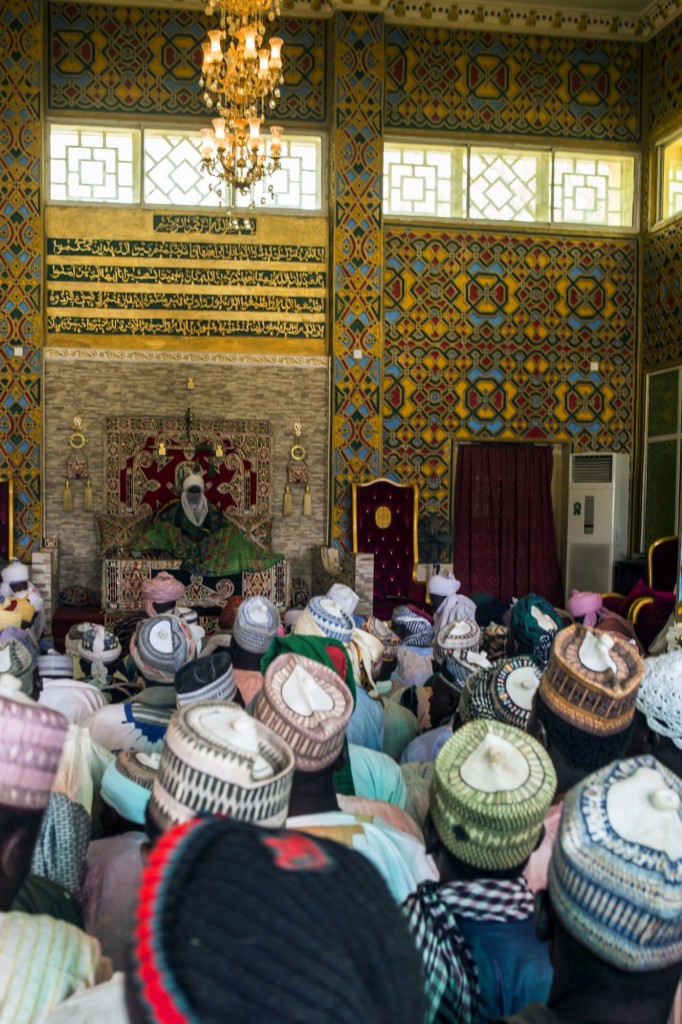 Emir of Kano presides over court in his palace. Issues are brought before the emir for resolution. Because the secular court handles the bulk of legal matters for the metropolis, the role emir’s court is basically ceremonial in nature.

Hausa kingdoms had converted into Islam long before the Uthman Dan Fodio-led jihad (1804-1808). The jihadist’s victories over the ruling order were swift and decisive because Dan Fodio’s forces did not have to fight conventional battles against the Hausa kings. The Fulani jihadist leader effectively deployed the stratagem of overthrowing the Hausa regents from within by inciting internal rebellion among Hausa peasants to rise up and topple their kings for the glory of Islam. After the victory, Uthman Dan Fodio ensured that all the ruling houses in Hausaland were under the control of turbaned Fulani emirs while everything else was consigned to loyal Hausa aristocratic class of the time. Till date, the archetypal Fulani still does not think that the Hausa or other ethnic nationalities have Islamic credentials to compare to those of the Fulani. The Fulani found interest in other vocations beyond their nomadic cattle-herding lifestyle. For one thing, there were vast territories and large populations to rule under the Fulani-ruled emirates created by Uthman Dan Fodio who proclaimed himself the first Sultan of Sokoto.

There were instances of rebellious uprisings by Hausa majority against the ruling Fulani emirs, but brutal repressive means have, thus far, been effective in keeping Fulani control over the Sokoto Islamic Caliphate relatively intact. At the turn of 20th Century, the expeditionary British-owned colonial force under the command of Frederick Lugard militarily subdued the Caliphate army and thereafter, combined the emirates with vast Middle Belt territory to form the so-called Northern Protectorate. For sake of expediency, imperial Britain opted not to dismantle the ruling structure in place at the time but instead brokered a deal with the emirs to set up a variant of indirect rule where the British colonial administration played only an oversight role. The Northern emirs, on their side, agreed to guarantee unimpeded access to the new colonial administration to conduct commerce and collect a percentage of all collected taxes. This turned out to be a very good deal for the Fulani-controlled Sokoto Caliphate which effectively relied on the imprimatur of the emergent colonial army to rule over Arewa North and the Middle Belt, even over territories that had remained out of reach of the Caliphate. By the time the British were ready to leave Nigerian colony after World War II, the Fulani emirs established a de facto hegemonic control over the entire Northern Region. In 1914 Amalgamation, Mr. Frederick Lugard unified the Northern Protectorate with the Southern Protectorate to create the British colonial territory called Nigeria.

This reality greatly impacted the mindset of the late-colonial political leadership echelon of the Sokoto Caliphate which was now consolidated under the charismatic Alhaji Ahmadu Bello (the Sardauna of Sokoto). The arrogant and boastful public pronouncements made by Ahmadu Bello and his lieutenants in the run-up to the Independence of October 1960 were predicated on the domineering role that the Sokoto Caliphate played throughout Northern Region whose territorial size dwarfs Southern Nigeria (Eastern and Western Regions combined). It was normal for Ahmadu Bello to presume that, as far as the British continued to be amenable, the political clout garnered with the population and landmass of the Northern Region would enable the Sokoto caliphate to cast its wings over rest of Nigeria, just as it was able to do in the North throughout the colonial era. The now infamous statement made by Ahmadu Bello on October 12, 1960, while addressing his followers depicted the grandiose optimism of the Fulani ruling aristocracy thus:

“The new nation called Nigeria should be the estate of our great-grandfather, Uthman Dan Fodio. We must ruthlessly prevent the change of power. We use the minorities of the North as willing tools and the South as a conquered territory and never allow them to rule over us, and never allow them to have control over their future.” (Reported in the Parrot Newspaper of 12th October 1960)

One could easily read the mind of the Sokoto Caliphate rulers and how they envisioned the Nigeria that we behold today. The three things that Ahmadu Bello envisioned have indeed all come to pass; the Fulani aristocracy now regards post-colonial Nigeria as “the estate of our (Fulani) great-grandfather, Uthman Dan Fodio”, the minorities of the North domiciled in the Middle Belt are being used as “willing tools” and Southern Nigeria is now looked upon “as a conquered territory”. Ahmadu Bello’s dictates are being followed religiously when today’s Northern politicians rebuff the notion of having a Southerner as president of Nigeria. This mindset was clearly manifested during the general elections of 2015. All stops were pulled by the Northern political elite to ensure that President Goodluck Jonathan, a Southerner, was pushed out of office even if it meant voting against one’s own party candidates.

The Washington Post’s reporter, Kevin Sieff, has a genuine reason to query whether the Emir of Kano, Lamido Muhammad Sanusi, is a relic or reformer. The Sokoto Islamic Caliphate was militarily defeated by the British expeditionary force more than a century ago – a development which led to the creation of the colonial state called Nigeria in 1914. The British Colonial Office in London, out of self-interest, willfully resurrected the Islamic Caliphate from death by grating the Northern emirs another lease on life by utilizing the latter as conduits for exercise British suzerainty over colonial Nigeria. At Independence, the British terminated their suzerain rule and the indigenous sovereign rights of all Nigerians, including those ruled by the emirs, were restored. Ahmadu Bello was killed during the military coup of January 1966 and thus, he did not live long enough to work toward the actualization of post-colonial Nigeria that he had envisioned. Even though political power was in the grasp of Northerners for the past half-century, the military politicians at the helm of affairs lacked the will and required skills to effectuate the Sardauna of Sokoto’s grand design. 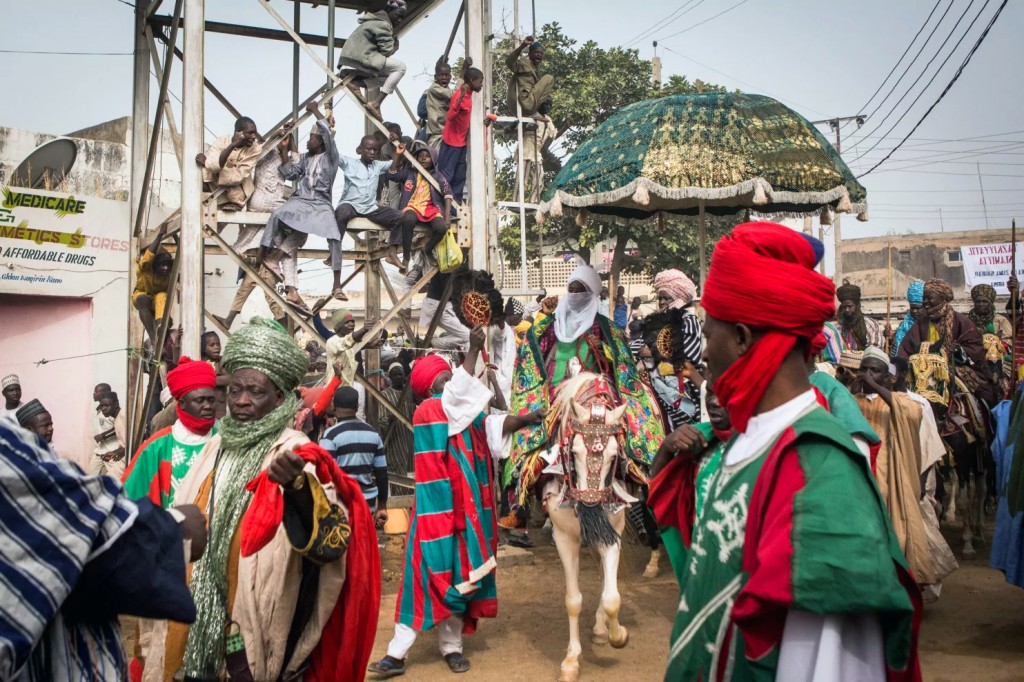 Colorfully adorned courtiers on foot and on horseback escort the Emir of Kano during a public outing. Pageantry reminiscent of halcyon days that are gone for good is always showcased, possibly as an exhibit of presumed power and influence of the regent of the Fulani-ruled emirate.

Rather than continue to maintain a monolithic North, which had enabled the Sokoto Caliphate to consolidate and monopolize political power, the former Northern Region has now been divvied up into 19 vassal states with separate governance structures. States of the Middle Belt, which are populated by the Northern minorities, have slowly acquired their “independent” voice to speak for themselves on routine matters of governance. In practice, it is impossible these days to get the Northern minorities to be used as “willing tools” in hands of the Northern emirates as was the case before. Furthermore, the spurious notion of regarding Southern Nigeria as a “conquered territory” sounds counterintuitive since constituents of that part of the country have gone to acquire more material wealth and education than their Northern counterparts thereby making the envisioned conquest of the South an impossible task. While the Arewa North remains the most impoverished and uneducated part of the country per capita, circumstances are not as dire in the South. To make things worse for the old Caliphate ruling order in the North, constitutional government of Nigeria now supersedes the ruling authority that Emir Muhammed Sanusi’s predecessors enjoyed from 1805 to 1966.

As aptly narrated by the Washington Post’s crew that interacted with the incumbent Emir of Kano, the current rulers over the vestiges of the decaying Sokoto Islamic Caliphate are barely hanging on to the relics of grandeur that are reminiscent of a bygone era. Even the once very powerful Emir of Kano now keeps his exalted post, in today’s Nigeria, only at the pleasure of whoever is the governor of Kano state. Despite all the pageantry implied in routines of the dynastic rule of Fulani emirs of today, their role is merely ceremonial. It can be said, therefore, that the Emir of Kano is nothing more than a relic from the past.

Emir Sanusi is an educated man, even by Western standards. He is well exposed to Western education as well as the technological know-how that goes with it. As a rich person, he can afford the best that money can buy in today’s consumption-driven world. The emir is, however, ruling over a society that is grossly uneducated and unexposed to modern trends. Streets of Kano City are teeming with hordes of homeless, uneducated, unskilled and unemployed youths (Amajiris) who are constantly being indoctrinated in the mosques to hate and resent Western education and worldview with their last breath. What nature of reform can the enlightened Emir of Kano champion in this setting, one would ask? In fact, Emir Sanusi’s penchant for modernity is exactly the reason why his impoverished and radicalized subjects want the ruler’s head by any means. As reported by the foreign newspaper reporter, the Emir of Kano luckily escaped assassination by bombing at the Central Mosque by elements from the Boko Haram terrorists. It is oxymoronic to mention reform to modernity and the Islamist society ruled over by the emir in the same breath. The only reformer that Emir Muhammad Sanusi can be for his own people is a DEAD one.