Why Biafrans Are Boycotting Anambra Gubernatorial Election Coming Up on November 18, 2017

Biafrans in Anambra state, who are eligible to vote, have unanimously agreed to boycott the upcoming Gubernatorial election in Anambra state slated for Saturday, November 18, 2017. It must be recalled that the planned election is predicated on Section-178 of Nigerian fraudulent Constitution. The Nigerian fraudulent Constitution was single-handedly written by General Abdulsalami Abubakar without the consent and contributions of Nigerians. He brought it into existence through Decree No 24 of 1999 which was promulgated by an undemocratic military junta headed by the same General Abdulsalami Abubakar. To further entrench the fraud, General Abubakar lied in the preamble of the said fraudulent Constitution by stating that; “We the people of the Federal Republic of Nigeria…… Do hereby make, enact and give to ourselves the following Constitution”, whereas there was no such time when the people of Nigeria ever got together to produce such fraudulent document being referred to as the Nigerian Constitution.

During an interview with Channels Television on June 12, 2017, Dr. Amos Akingba, a NADECO Chieftain, stated unequivocally that the Nigerian Constitution is a fraud. The interview can be viewed using this link and begin to view from 1.55 mins up to 2.39 mins;  https://www.youtube.com/watch?v=FYPcMhie66k

In another interview conducted by Channels Television, Chief Ayo Adebanjo affirmed that the current Nigerian Constitution is a fraud because it was not made by the people but by Northern Military Generals. The interview can be viewed by opening this link and sliding to view from 4:47 mins; https://www.youtube.com/watch?v=BpRHK-JtFTo

Therefore, participating in the upcoming gubernatorial election in Anambra state will not be of any benefit to Biafrans neither will it further the cause of the restoration of the nation of Biafra because whoever is elected will be helplessly and hopelessly bound by the Oaths in Schedule-7 which mandate the governor to ruthlessly arrest, detain, and kill any person agitating for Biafra exit from Nigeria. This is why Willie Obiano and Okezie Ikpeazu have been killing thousands of Biafrans in their capacities as governors of Anambra and Abia states, respectively. It will be foolhardy for Biafrans to participate in an electoral process that will produce someone who ends up killing them as mandated by the fraudulent Constitution upon which the electoral process was predicated.

For the avoidance of doubt and to put the records straight, Biafrans are only boycotting the Anambra gubernatorial election but will not stop the election. The clarification is necessary because enemies of Biafra including Igbo politicians are all over the media lying that Biafrans are planning to stop the Anambra election with a connotation of violence. Biafrans have agreed to stay in their homes on that day in order to comply with the agreement to boycott the election. Biafrans are also staying at home in order to avoid being shot and killed because Willie Obiano has perfected plans with the Nigerian Army to shoot Biafrans if they come out of their houses and he (Obiano) will claim that the dead Biafrans were killed by the Indigenous People of Biafra (IPOB).

In the event that a perfect boycott (100%) is achieved, Section-184(a-ii) of the fraudulent Constitution is clear on what should happen, hence the claim by mischief makers on a state of emergency being imposed is a lie from the pit of hell.

The Directorate of State (DOS) assures Biafrans that the Biafra restoration process is still on course and the Lower Niger Independence Movement (LONIM) is the only viable and peaceful platform through which a Referendum will be engendered. Irrespective of the outcome of the Anambra gubernatorial election, Biafrans remain undeterred because the restoration of the nation of Biafra is a divine project whose time has come and is, therefore, unstoppable, unquenchable, irreversible, and irrevocable. 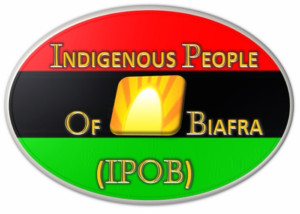