We Didn’t Lose This fight; We Are Now Aware, Awake, Alert and Better Situated to Prevail Over the Status Quo in the Near Future

The Musings of an EndSARS Protesting Youth: What Happened Last Night Should Make Us Wiser!

The President’s threat or speech yesterday broke us but taught us many hard lessons. I and so many others couldn’t sleep last night… We were broken!!!!!!

We protested for 12 days without vandalization, 12 days of rejecting bribe, 12 days of caring and looking out for each other. 12 days of giving free medical care and legal services.

Brands, both national and international, Celebrities, Churches all protested… influential people were lobbied to add their voice… At the protest grounds, the Christians gave room for the Muslims to have their Jumat prayers. The Christians had their service on Sunday… There was a candlelight service held all over the nation for fallen heroes. Youths, despite the hard economy, spent their personal money cooking for each other.

No one knew who was a Yoruba, an Igbo or Hausa, or Edo… We ate together and danced together. For 12 days, these were organized without a formal leader with just social media tweets, retweets, posts, shares with a hashtag.

For 12 days, we built the Nigeria of our dreams… And built their nightmare… And they got scared. They know if we’re united, we would have one voice. If we have one voice, we have power. And if we have that power… WE WOULD DEMAND A BETTER NIGERIA.

If we’re united and not fighting, how would they budget money for security to calm insurgency? How will they create religious fights and make money?

So, they sponsored hoodlums to disrupt the protest… But we overpowered these hoodlums by getting our own private securities and security dogs to protest grounds. When the military who were ordered by “Powers beyond their control” to shoot. When the guns were fired, they didn’t care who was a Muslim or Christian. They didn’t care who was Yoruba, Igbo, Hausa, Efik, or Urhobo. They killed unarmed people sitting down and singing the anthem.

Do you all remember how President Buhari contested for presidency up to 5 times? He cried on National TV when the Chibok girls were kidnapped. He promised us heaven and earth. He campaigned vigorously. He protested against the then government.

He was voted in thinking he would bring the change he promised… What did we get in return? We were handled with an “iron fist”.

THEY DO NOT CARE ABOUT THE STATE OF THIS NATION!

THEY DO NOT CARE ABOUT THE PLIGHT OF THE CITIZENS! 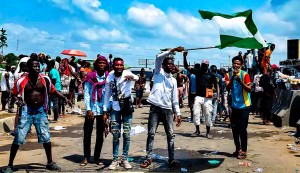 Flag-waving protesting youths at the Lekki Toll Gate, near Lagos, before the Nigerian Army troops opened fire on the unarmed protesters. A dozen youths were killed at this incident.

WE DIDN’T LOSE THIS FIGHT.

Our parents failed because they had less information. But we have a lot of information at our fingertips.

We didn’t lose this fight… We’re now Aware, Awake, and Alert. We know what we’re up against and we’re ready. I am ready!

A Yoruba man, Igbo man and Hausa man, is your brother. An Igbo woman, Hausa woman and Yoruba woman is your sister.

Remember the good times we shared at various protest grounds, irrespective of tribes and religion and let Nigeria come first in your heart!

We’re young. We are strong. We are smart. We are 20 steps ahead of them. We’re their nemesis – the wrong generation to mess with. 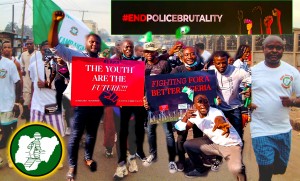 The leadership of a youth-oriented organization called the Run for Life Campaign featured earlier at the Lekki Toll Gate protest site only a few hours before the arrival of the soldiers that killed some protesters.

We just need to re-strategize. Come 2023, No PDP, No APC, and no recycling of past or present leaders. Together, we shall save Nigeria and make it great again.