We Remain Solid & Unshaken; We Shall Take & Possess Every Inch of this Land – FUNAM

Below is text of press release by the FUNAM

Our attention has been drawn to the series of campaigns being waged against the Fulani nationality following the killings in Plateau where some civilians who have been tormenting the Fulani nation were justifiable hacked down.

We frown at the conscious attempts to demonize the Fulani nation by the media and their collaborators.

We wish to make the following categorical statements on the Plateau incidence:

1) The killings in Barkin Ladi was motivated by previous killings of Fulani men and women by Birom youths in collaboration with certain minority ethnic groups in Plateau. We hereby justify these retaliatory attacks and warn that we shall continue to defend ourselves and uphold the Fulani heritage now and in the future. Let it be known that the Fulani Special Force coordinated the attacks.

For the avoidance of doubt, our heritage is that ANY ATTACK ON A SINGLE FULANI IS AN ATTACK ON ALL. ANY OF SUCH ATTACKS MUST BE COUNTERED WITH TRIPLE MEASURE.

2) That apart from stealing hundreds of cows belonging to FULANI, these criminal elements also set ablaze several houses belonging to peaceful Fulani natives across the entire territories in Barkin Ladi and Plateau.

3)That we have said it several times that Plateau is an indigenous territory of the Fulani people. We are the first to settle in Plateau-Benue axis thousands of years ago. We shall take and possess every inch of this land; A conscious attempt to rewrite history and distort, manipulate or destroy our past will be resisted with all the might at our disposal. 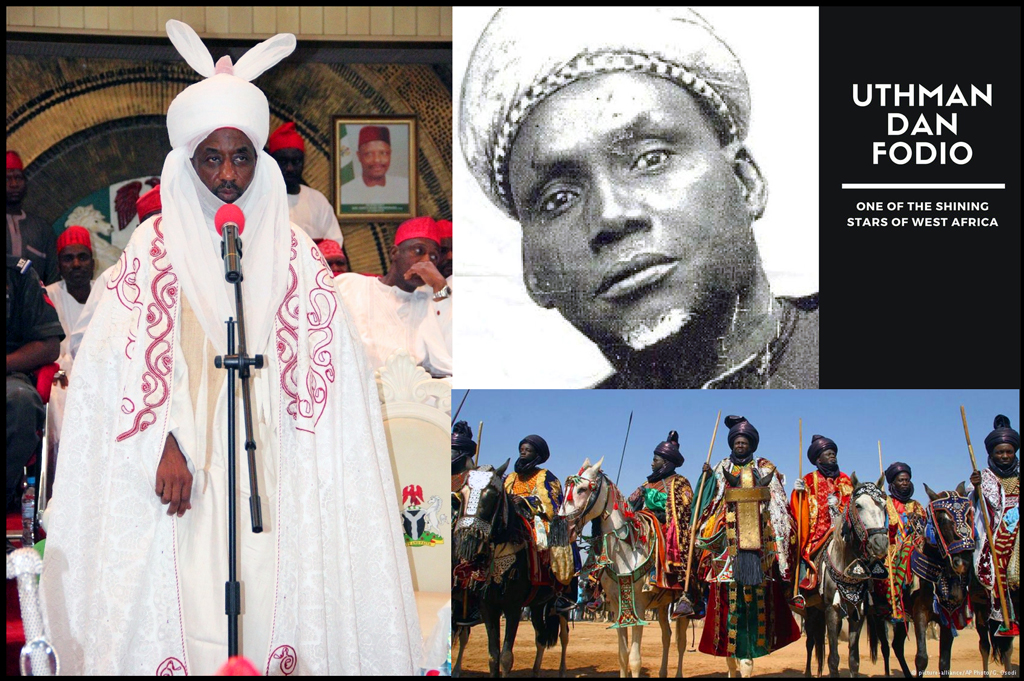 Uthman Dan Fodio was founder of the Sokoto Islamic caliphate that has dominated Northern Nigeria in the past 200 years. On the left is Sanusi L. sanusi, the reigning Emir of Kano

4) That there is a clear agenda to divide Nigeria and exterminate the FulaniI people. We are long aware of this plot. We call on Fulani all over Africa to prepare for this inevitable war and set our people on an offensive path rather than being weaklings that choose a defensive strategy in warfare.

5) We have said it over and over, that Nigeria is the only inheritance we have in Africa and anywhere in the world. This land belongs to us, from Sokoto to the banks of the Atlantic Ocean. This was the destiny bestowed on Uthman Dan Fodio which would have been fulfilled since 1816 if not for the obstruction of this great assignment by the British.

It is no longer time to play the ostrich. Our men are waiting. We are eager to fight. We are boiling with the zeal to actualize our dream; enough of double dealing and ambivalence by Fulani political leaders who unfortunately think the Fulani can only take back what belongs to us through appeasement and elections destined to reflect cultural values antithetical to the preaching of Uthman Dan Fodio.

6) We warn that nothing will be able to save those raising their voices against us and Allah. Nothing will be left behind, from the East, West and Middle Belt except those who accept the creation of Allah and the leadership place of Fulani in fulfilling this destiny. Since this irresponsible Western notion of democracy was imposed, the Fulani have been shortchanged and maligned. The Middle-Belt, the West and the East should be prepared. We are already here.

7) Let the Birom and the ethnic minority invaders in the entire Middle Belt leave our territory or be prepared to accept our ways of live. It is time for them to savor their wounds. It is just the beginning. Many more will come, and nothing can stop us.

8) Insha Allah, we shall take this battle across the sea, on the land, in the air, on the mountains, in every territory currently occupied by the Kafirs. This is our position. This is our destiny. For those who think they can stop or continue to conspire against us, we wish them good luck.