What Are Nigerian Christian Leaders, Organizations, Other Religious Bodies Doing About Upholding the Truth Regarding the 1999 Constitution? – Uwechue

In the matter of the 1999 Nigerian Constitution, the Nigerian way of doing things is unlikely to favour anybody. That is the way of bypassing problems rather than facing them and dealing with them once and for all.

The Constitution is the foundation of the country and so, must be obtained properly if citizens are to have the confidence to honor it and abide by it. Disturbingly, the 1999 Constitution lacks validity. Several things in it are entirely untrue and some that are contrary to what had been agreed pre-Independence for any union of ethnic nationalities ever to be possible. Much has already been written about the inconsistencies in the 1999 Constitution. But a key one is in the preamble that starts with, “We the people of the Federal Republic of Nigeria…”. Yet, “We the people…” never entered into this agreement. That, in itself, makes the 1999 Constitution a FORGERY and therefore, its contents are invalid and not binding.

It is, therefore, not advisable, for integrity’s sake, to continue avoiding addressing the dishonesty in our country’s social contract. Nigeria has now been on a journey of some twenty years on a bypass-problems road with this forged Constitution. But the time is now here to get onto the right road as a nation by doing the right thing. Otherwise, the cost would be much too high.

Those in leadership at Federal, State and Local levels, plus ordinary citizens, should thoroughly consider the consequences of remaining on a “bypass-problems road”. We have a fast-growing population of young people who know that their lives in the Nigerian environment are substandard in every way compared to that of young people in functioning countries. They know the reasons for this difference are corruption plus a lack of strong institutions. They are also now aware of their civil rights and human rights. They are “woke”!

One of the many negative consequences of Nigeria being a country that citizens cannot put faith in is that Nigerians are increasingly becoming economic migrants all over the world because of a Constitution that is, in effect, corrupting and anti-development, plus Apartheid (in that it unfairly favors a minority section over the indigenous majority). The issue of migrants is currently a hot topic in Europe because it creates racial tensions in host countries due to the changes in demography that mass migration can bring. International eyes are now on Nigeria seeking the reasons that force its citizens to flee, often illegally and dangerously. This reflects negatively on Nigerian leadership that should have been seriously addressing the corruption that the country is famed for.

On the African continent, we have the example of Apartheid South Africa for our instruction. Black South Africans saw that they had no hope of a fair and good future in their land unless they resisted the Apartheid system that was against them. Initially, their demonstrations were met with state violence from security services by a government intent on maintaining the status quo. Eventually, a point was reached when all sides and the watching international community realized that costly armed conflict would likely ensue if Apartheid were not taken down because Black Africans were determined to make the ultimate sacrifice for their freedom. So, negotiations that successfully dismantled the Apartheid system began.

With a population of over 200 million Nigerians and rapidly growing, all of us can’t flee abroad for refuge. Thousands who have fled across the Sahara have ended up in dehumanizing conditions and those among them who could have returned to Nigeria where they still face a debased existence. Others who have not the means to flee, or who have been deported back to Nigeria, are uniting in purpose with those here, increasingly determined that they will remove everything that prevents them from having a good life in their ancestral lands. Discontent and anger are growing daily. Nobody who values Nigerian lives would want there to be any armed struggle before transformative change happens.

It is repeatedly asked: Mandela was a lawyer and he used his knowledge to put South Africa on a better path. So, what are Nigerian lawyers doing about the inaccuracies in the 1999 Constitution? Rev. Desmond Tutu is an Anglican cleric who used his position and his knowledge of God to advocate truth and justice in the anti-Apartheid fight. So, what are Nigerian Christian leaders and Christian organizations, plus other religious bodies doing about upholding truth in the matter of the 1999 Constitution? 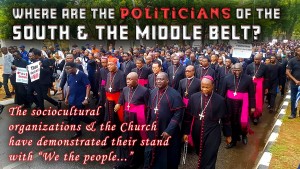 Nigeria’s political class is missing in action while their constituents to agonize in the pain and woes of Unitary Nigeria.

The nation’s eyes are now beamed on the 1999 Constitution, which is submitted as the supreme law of the country. The increasing clamor to bin this forged document should not be ignored by the leadership class and bypassed via “constitutional amendments” when what is needed is an autochthonous constitution that is indeed written by “We the people…” and legitimized by Referendum.

Young people desperately want and deserve good lives within the territory called Nigeria. The best way to remove the obstructions in their way is preferably through nonviolent action. That is through dialogue and negotiations with those in leadership positions. Nonviolent strategies where leaders are responsive and responsible, with the moral and intellectual competence to understand that the government’s purpose is to serve the people and bring about what the people want. The increasingly concerned world is watching events in Nigeria.  So, this is an opportunity for the government of the day to show that Black lives matter, by doing the right thing, and doing the right thing the right way concerning the 1999 Constitution.

Ndidi Uwechue is a retired Metropolitan (London) Police Officer and a Pro-Social Advocate. Her personal mission is to use every means available “To produce a safer and more caring Nigeria”. She writes from Abuja.