When Brothers Fight to Death Over A Dispute, the Stranger Steps in to Take Over Their Inheritance

When Two Brothers Fight to Death, the Stranger Inherits Their Property

This African proverb conveys the truth about human society as chronicled through the ages. People become owners of the space they inhabit for an extended period of time. People have been dispossessed of their land space through military conquest by invading outside forces. On a large scale, the society or country can be remotely controlled by its foreign exploiters as we behold today in Africa and other Third-world countries. Very often, local indigenous hands are deployed as agents that represent the interests of the foreign exploiters of the African continent.

Let’s focus first close to home before going further afield. What happened to my hometown community between 2012 and 2020 underscores the saying that when two brothers fight to the death, a stranger inherits their property. The Igboukwu Development Union (IDU) failed to elect a President-General (PG) to head the Executive Committee whose tenure expired in December 2011 because the two top candidates, who belong to the same section of town, chose to fight each other to death. Even before the scheduled voting was to take place at the Amaehulu town Hall, the early nomination and screening process had already created a controversy that resulted in a lawsuit.

At the earliest sign of discord, the local partisan political operatives of the party in power at the state capital in Awka saw an opening to take advantage of the situation. Despite the heroic endeavor by the outgoing administration to put an interim leadership in place, the IDU Executive Committee was instead officially disbanded by agents of the state government after the 2011 general elections were declared inconclusive. A so-called Caretaker Committee was established in February 2012 and given three months to re-do the elections and return the reigns of control back to the elected IDU Executive Committee. That initial three-month mandate was subsequently stretched to span eight full years.

Town unions are the only form of governance function that is felt by grassroots inhabitants of ground zero. With the disbanding of community-elected leaders to run my hometown’s development union and substituting them with handpicked partisan loyalists of the ruling party, all credible conduits for community development and grassroots governance were shuttered for as long as 8 years in Igboukwu. The High Court in Aguata took over the chore of resolving an election matter that ought to have been conducted on December 29, 2011 and tossed around this case till a verdict was given in 2019. It should be mentioned here that, during the eight years of rustication of the IDU Executive Committee, the Amaehulu Town Hall premises were overgrown by weeds and shrubs because of neglect and abandonment. Two Ezihu brothers chose to fight to the death and Ndi Igboukwu paid the price of that tomfoolery by wasted 8 years in the lives of the community’s residents.

In a multiethnic country like Nigeria, competition for scarce resources and social services is intense. The food fight is aggravated by an overarching constitutional framework that facilitates nonaccountability, squandermania and nurtures a patronage system that preferentially favors those in power and their cronies. The thirty-six state capitals are the foci for disbursing Nigeria’s national wealth that is concentrated at the center. Because of its status in the distribution chain, a state governorship position is a highly coveted job in today/s Unitary Nigeria. The five states of the Southeast are considered to be the main source of revenue flow into Alaigbo from Abuja. To assert that political jobbers are ready to kill to become the state governor is an understatement. Ever so often, rival local politicians lock horns in a fight to the death, especially during the electioneering campaign season. In this desperate confrontation setting, strangers can easily gain access into the neighborhood to stage a takeover. The scheme is simple – weaken the targeted victims by fomenting a dispute among them. As they begin to go for each other’s jugular, the stranger shall then have free rein to take over what he wants.

Cut-throat competition can also be instigated at a sub-national regional level even where there was no history of acrimony or intercommunal violence. This happened in the run-up to the Nigerian Civil War in 1967 when the former Eastern Region was arbitrarily divvied up into three states by a military decree issued by General Yakubu Gowon. Administrative delimitation of boundaries was redrawn inside a former semi-autonomous Eastern Region by an outsider (Gowon from the former Northern Region) without any consultation whatsoever. As it was allegedly argued at the time, the former Eastern Region was divided as a means of freeing the Southern minorities from the shackles of an imagined Igbo hegemony. This narrative eventually soured the intercommunal rapprochement that had prevailed between the Igbo and the other minority ethnic nationalities of the East. The state creation of May 27, 1967 was the last straw that broke the camel’s back because three days later, the secession of Biafra was declared as a befitting counterpoise.

A Global Order Predicated on Rapacious Exploitation of the African Continent

At the global level, Africa and its peoples have been regarded as objects for exploitation by outsiders. The Africans were enslaved and their free labor used to tame the New World for profitable exploitation of White immigrants from Europe. When this conduit for exploiting the African began to make less economic sense, another decision was brokered in Berlin (1884-5) to share Africa as colonies of European powers. Africans are kept in their ancestral lands but were turned into slaves when Europe imposed its suzerain rights over our African sovereign rights. Despite the granting of so-called Independence and self-rule, the puppeteer is still the European powers that got the piece of African real estate for free at the now infamous Berlin Conference. 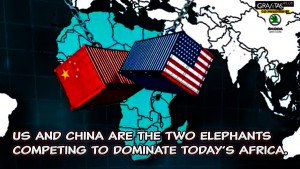 How shall the US and China choose to resolve their conflicts of interest in today’s Africa? Shall it result in a 21st Century version of the Berlin Conference, or shall African countries find the unity of purpose to make continental Africans relevant in decisions made regarding their own future?

The African continent is still being looked down upon by the countries that dominate the global economy. Although it is the richest continent in terms of natural resources, Africa is home to the poorest countries in the world. The overwhelming majority of ongoing hot wars around the world are being fought on the African continent. Once a geopolitical faultline is detected anywhere in Sub-Saharan Africa, sophisticated lethal weapons are supplied to the combatants to fuel the ensuing conflicts. It is akin to giving a vigorous training regime to a professional wrestler in readiness for a major upcoming showdown. In Africa’s case, the “wrestlers” are primed to fight to the death. In ensuing domestic acrimony and rancor, the ground is softened and prepped for unprecedented plunder. Uganda’s Museveni just rigged himself back into power after ruling over this landlocked African country for more than 30 years. Such leadership figures are actually doing the bidding of strangers with the plunder of Africa in their blueprint. The only means to upend the Musevenis of Africa today is to fight them to the death.

It is now clear that the arbitrary partition of the African continent into countries with total disregard to preexisting geopolitical fault lines was done at the Berlin Conference to serve the interests of the European colonial powers involved. Sub-Saharan Africa suffered a common scourge during the trans-Atlantic slave trade and colonization that followed. Europe had combined with the US to dominate the African continent since the end of World War II. In this new millennium, a new global player, China, has arrived on the stage with a noticeable impetus and sense of urgency. China has now become the largest foreign trading partner with sub-Saharan Africa. The West, featuring the US and Europe, resent the brazen incursion of China into what the former had regarded as an exclusive economic backyard for centuries.

Africa is shaping up to become a hunting ground for two global economic powerhouses. Russia has limited its activities to targeted local plunder of natural resources, as was the case in the Central African Republic (CAR) and neighboring countries. The trajectory of Chinese engagement in Africa makes it very likely that there shall be a clash with the West in the foreseeable future. African countries would have been in very good stead to exploit this ensuing competition between the West and China. Unfortunately, more than fifty countries of Africa prefer to enter into bilateral engagements with giants like China, the US and Europe. As expected, African countries lose out big time.

Past African leaders had attempted to forge greater unity among self-ruled nations. On the one hand, there were the pan-Africanists who pressed for the emergence of a continental government. On the other hand, there was a conservative caucus that cautioned for more circumspection. A compromise agreement was reached to form the Organization for African Unity (OAU), now called African Unity (AU). There was an intense rivalry for territorial acquisition between the British and the French in West Africa in the latter half of the 19th Century. The escalating rivalry between France and Britain was defused at the Berlin Conference, where an understanding was reached by imperial Europe regarding territorial acquisition throughout the African continent.

The “equitable” sharing of the African continent among 19th Century imperial Europe made the British and French to think less about resuming the military confrontation that had offered them the only means of settling disputes of such nature in the past. The vast territories of Africa given away as colonial possessions contained enormous amounts of resources to fuel the industrialization of Western Europe and more. A world order emerged that normalized the colonization of the African continent and the plunder of its wealth by outsiders. A new and equally intense rivalry between the West and China is now palpable in most parts of Africa, especially over matters of economic policy and political influence. It is unlikely that the West would opt for a military solution to China’s expanding activities on the African continent. 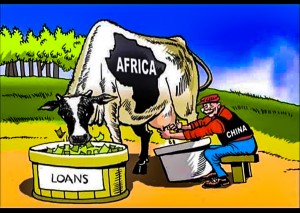 China has given loans liberally to African countries for development projects on terms that shall make debtor African countries to be unable to repay. China would exact repayment through land and other asset seizure.

The million-dollar question is this. What then shall be Africa’s role in a future rapprochement that shall be worked out between the global giants that are currently salivating over the continent’s resources and land space? Shall the China-West solution to their conflicting interests in Africa be a 21st Century version of the Berlin Conference of 1884-5? Since the landed resources of Africa have always been the bone of contention, contemporary Africans have cause to worry about what the future portends. Africans ought to be alert and conscious that history shall soon repeat itself unless the indigenous owners of the continent hasten to heed the admonition given to two brothers who have opted to fight to the death over their inheritance. When the dueling brothers kill or incapacitate themselves through incessant bitter squabbles and fighting, the stranger would readily step in and inherit their property, once more.

Only the indigenous Africans have the power to stop their continent from becoming a victim to a 21st Century version of the Berlin Conference of 1884-5.