While the Yoruba & Hausa Regard Lagos and Kano, Respectively, as Their World, the Igbo Regard Entire World as Their Village – says Obasanjo

President Olusegun Obasanjo has never been known for being shy or fearful of expressing his thoughts, especially with regards to Nigeria and its geopolitics. Often, he has stepped on some sore toes because some individuals or groups may dislike what the former military ruler and politician has to say. This time, Obasanjo finds it cathartic to publicly share his thoughts about the Igbo ethnic nationality which is one of the largest ethnic constituents of Africa’s most populous country, Nigeria. This YouTube video was made to discuss the many positive attributes of the Igbo ethnic nationality which the former president says to be the most Westernized, educated and successful group in Africa.

He discusses the history of British colonialism in Nigeria, particularly the fact that while the Yoruba in the West and Hausa in the North were cowed easily by the colonial administration in nine months, it took a minimum of thirty years for such a feat to be accomplished among the Igbo ethnic nationality inhabiting Eastern Nigeria. The Igbo worldview and attitude reject the absolute subservience of individuals to their fellow humans, irrespective of the disparity of means and livelihood. Igbo republicanism perplexed the British colonizers who first noted that Igbo society was organized differently than what obtained among the Yoruba and the Hausa ethnic groups. Before they could make considerable headway in reining in the self-aware group, the British colonial administration had to commission special anthropological studies about the Igbo.

The archetypal Igbo is inclined to be self-reliant in most aspects of one’s life pursuits while his counterpart in the North and West depend on the pre-approval of superior entities which, according to Obasanjo, constitute an encumbrance to monarchical societies. The Igbo sociocultural milieu enables them to thrive and excel in all aspects of human endeavor, no matter wherever they find themselves. The Igbo are very entrepreneurial and thus would venture far afield in search of greener pasture wherever such might exist. This exceptional quality distinguishes the Igbo from the other ethnic nationalities inhabiting Nigeria’s geopolitical space.

According to Obasanjo, the average Yoruba and Hausa considers Lagos and Kano City as his world, respectively, while the Igbo counterpart regards the world to be his village. This mindset is clearly evident in Nigeria’s demography which affirms that, nationwide, Ndiigbo are the second-largest residents in all states of the country that are outside their Southeast home base. Some have averred that the Igbo constitute the metaphorical mortar that bonds the Nigerian nation together. Paradoxically, this go-getter attitude of the typical Igbo has, over time, stirred up the envy and resentment of the ethnic nationality by fellow stakeholders in Nigeria who peddle the fear of “Igbo domination” as the monicker for checkmating the ascendancy of these hardworking people.

The Igbo led the former Eastern Region in the secession of Biafra as a last-ditch effort to prevent a perceived genocidal scheme championed by the Islamic North and their allies elsewhere in post-colonial Nigeria. This ethnic nationality bore the brunt of Africa’s deadliest civil war (1967-1970), during which an estimated 2-3 million children, aged and infirm died of starvation and hostile fire from federal Nigerian troops armed by Britain, USSR and Middle East Arab countries. Since the Civil War, Nigeria’s Eastern Economic Corridor (NEEC), which traverses Alaigbo, has remained shuttered as an official policy of a Unitary Nigeria which replaced the 4-regional federalism of the First Republic. 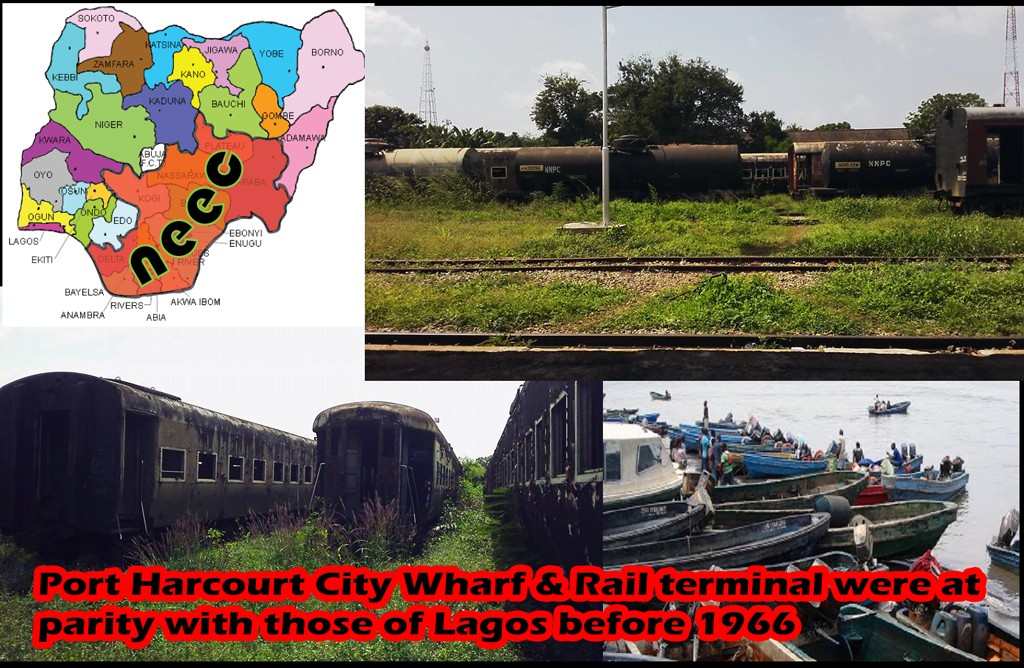 Central Nigerian government policy has been to shutter the Nigerian Eastern Economic Corridor (NEEC) since the eve of the Civil War. Port Harcourt City wharf and rail station used to be at parity with those of Lagos until 1966.

The Igbo remain the economic engine that propels the country’s economy despite the deliberate impediments placed on their paths as a people by those who claim the Allah-given right to eternally rule over all Nigeria, to the exclusion of the Igbo. Imagine what the Igbo would have been able to accomplish by now if they had been left alone to input their sweat, talents and resources in the development of the West African sub-region. I believe that’s the real essence of this video.