The rains returned to Lagos yesterday with fresh flooding in many parts.

The situation hampered human movement on a day set aside for election into the 20 local governments and 37 local council development areas.

The rain, accompanied with thunderstorms, lasted for more than two hours, confining many residents to their apartments, until it subsided.

The flooding of the roads compelled road users to drive against traffic in some areas as people rushed to beat the 7 am restriction movement time.

Sango Otta in Ogun State was also badly flooded in the aftermath of yesterday’s rain.

Major roads in the industrial town were submerged and impassable for vehicles and humans.

Some vehicles broke down on the roads after getting stuck in the floods.

A major part of the Lagos-Abeokuta Express Way under the bridge in Sango was overtaken by flood.

The victims aged six and 12 were children of Mr. and Mrs. John Obasi.

The rain fell all though Friday night until yesterday causing severe damage in parts of Owelle Aja and Oduke in Obosi and Okpoko areas.

President-General of Okpoko community, Linus Ezenwamma, blamed the flooding on indiscriminate dumping of refuse, leading to blockage of drainage outlets.

Also, parts of Asaba, the Delta State capital, were similarly submerged following a downpour that disrupted economic activities in the metropolis.

The rain which started on Friday night lasted over six hours, trapping hundreds of thousands of residents indoors.

The twin cities of Okpanam and Asaba were cut off as the only road connecting them was under water, disrupting vehicular movement.

The Lagos downpour began at 5 a.m. which left many areas flooded and affected early commencement of voting in the local government polls.

At the Berger end of the Lagos-Ibadan expressway, many motorists trying to get out of Lagos, apart from contending with the rain, were caught up in the restriction of movement time which took off at 7.00am causing a heavy traffic gridlock.

In Badagry, only few voters were at some polling units where security personnel, electoral officers and materials were on ground by 8a.m.

Mrs Verona Chike, the Polling Officer in the unit, blamed the low turnout on the downpour.

“I am sure that more voters will come out as soon as the rain stops,” she told the News Agency of Nigeria (NAN).

“We are leaving now. It is heavy rain and only God saved us that the communication mast did not fall on our office or anyone because the rain was too heavy,” he said.

Worst hit by the Asaba flooding was Okpanam road where the flood sacked many businesses along the over two kilometre stretch of the road.

The drainage project abandoned by successive government could not cope with the deluge as flood waters swamped many business premises.

Another areas hit by the flooding problem is the Mariam Babangida Way as the entire stretch of the road was submerged.

The Police Headquarters was not spared as policemen posted on sentry duty abandoned their post for fear of being swept away by the flood.

The Police Command is built on low lying terrain and compounding the problem is the fact that premises is marshy and silted.

Many motorists had a hectic time as their vehicles broke down in the flood and commuters had to trudge through muddy waters to get to their various destinations.

A worker with the State owned newspaper narrowly escaped death after the wall adjoining a shed collapsed.

The worker who spoke to The Nation praised God for protecting her following her narrow escape.

She said, “I was on my way to work, but due to the heavy rains I hid myself in a shed. No sooner had a changed location than the wall suddenly caved in and fell right on the spot I had just left five minutes earlier. I thank the Almighty God for this miracle of survival.”

Concerned that many residents of Asaba run the risk of being swept away by the huge current of flood waters in parts of the city, the government has warned residents to keep away from flood prone areas. 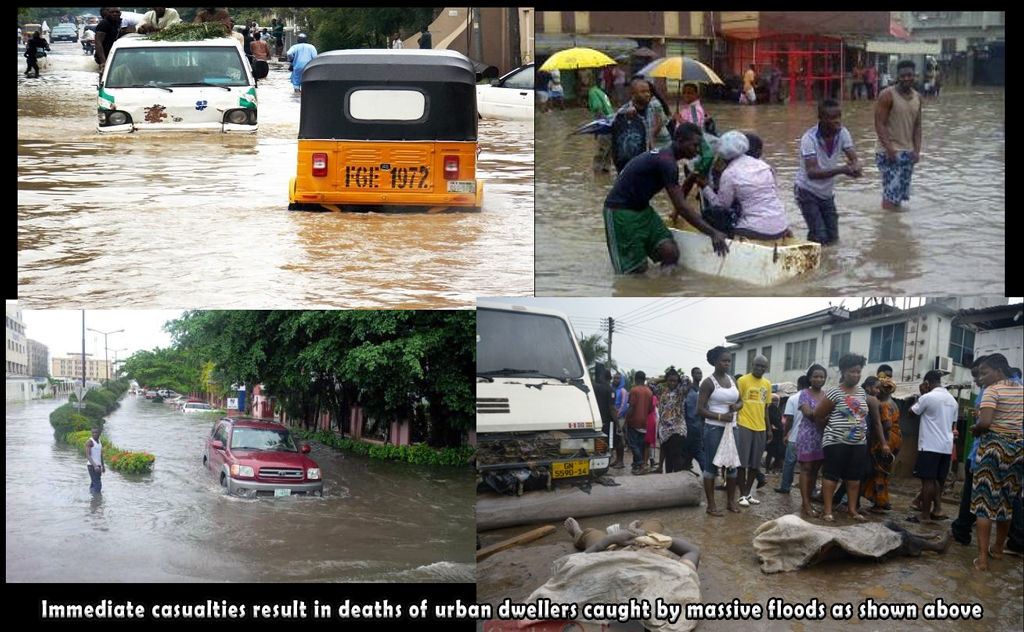 Intense thunderstorms result in flash floods which quickly inundate major thoroughfares and expose road users and pedestrians to risk of drowning or being electrocuted by submerged live electric cables etc.

The State Ministry of Information in a statement advised Deltans, especially those living around flood prone areas in Asaba, to be careful in their movements with the return of torrential rain.

It said  government is concerned about the safety of all those living in the state, and  advised residents to avoid areas with high current of flood as it is impossible to determine one’s ability to withstand such pressure.

It added: “the state government feels the pains and inconveniences suffered by residents in terms of damage or loss of property, while reiterating the state government’s resolve to put an end to flood issues in Asaba and its environs assuring that all contractors recently awarded drainage and flood control projects will mobilise to site as soon as the dry season sets in.”

Culled from The Nation