Without Immediate Devolution or Restructuring, Nigeria Shall Soon Become a Theater for Global War Against Terrorism – says Obaze

Nigeria faces an existential threat. Slowing but surely, Nigeria is dying. Its demise will not be by implosion and a bang as some had forecasted but by agonizing segmental dissipation, and a whimper. The National Assembly’s recent kneejerk effort to review the constitution panders to the incremental approach, when the needed review should devolve to the people as was done in 2014. With ongoing zonal coalescing and alignments, the nation is already at risk of a constitutional force majeure. Nigeria will not decline into a categorically failed state; it will just disintegrate, courtesy of bad leadership and the crass unwillingness to act and arrest the nation’s insecurities and prevailing dichotomies. Whether Nigeria’s splintering will be peaceful, or by force of arms, remains an open-ended question.

The whole body begins to hurt and die, when parts of the whole are malignantly afflicted. That is Nigeria’s fate. Let no one be in doubt. The sepsis has been long in coming; and long-hidden canker sores are now festering open sores of the nation. There are no more pretenses. And there shouldn’t be. We are a nation in dire crisis. The corporate body known as Nigeria, which for long was held and bound together by hope, tolerance and accommodation, is in a free all. Insecurity, the cheapening and devaluation of lives, has left the nation hopeless. Where there ought to be frightening noise, and cry for remediation, the nation has become catatonic.

Nigeria is no longer at ease. And this is not politicking. It’s about the nation’s state of mind, which is such that there is an eerie silence in the land; when there should be discourse, dissension or even protestations and civil disobedience over the state of the nation. Suddenly, Nigeria has gone catatonic. Why? And why is no one speaking up? Nigerians are tired of Nigeria. They have fatalistically given up on the nation, thus willing for the chips to fall where they may. This is not mere rhetoric. The predisposition is real.

For long, Nigeria had suffered from the cruelty of false hope. In this post-change era, the vicissitudes and vagaries of governance aside, endemic challenges, and the inability of the national elite to rally to a consensus on the way forward, are wrecking Nigeria. Renascent sectionalism, and unbridled ethnicity and sectarianism, which undermine the nation’s secularity, as well as unkept promises, continue to elicit deep resignation.  What is even far more worrisome is that ongoing retrogressive developments in Nigeria should give us pause, since Nigeria’s foreign friends and adversaries are watching her closely. But rather than worry, we are all mute and acquiescent.

Insecurity has become second nature in Nigeria. And there is evidently an external dimension to it, as the Nigerian military hinted recently. Discovery of some sophisticated weapons in the insurgency theatres speak to this concern. The long-festering insurgencies aside, visceral bloody conflicts and crimes are being unleashed daily against Nigerian citizens, mostly by foreign Fulani cohorts, who have embedded themselves into different parts of the nation, while masquerading as cattle herders. Nigerian citizens – Christians and Muslims alike – are being killed daily. The former are deliberately targeted; the latter, tend to be collateral damage. A corollary is that multiple quiescent ethnic and religious fissures are manifesting, now without pretenses. This is to say that the die is cast. Nigerian leaders must brace up for the possible emergence of proto-states, and do well to draw lessons from Southern Cameroon.

The government’s responsibility to protect, extend to maintaining sanitized and secure territories. As a nation, we can no longer pretend that with our open-border policy, Nigerian territories are now prone to the insinuation of ISIS and Al Qaeda terrorist cells. Conflicts in Libya and the Sahel make this scenario feasible, as does our numerous ungoverned spaces. This outlook makes existing Boko Haram and ISWAP challenges a child’s play. But more worryingly, we know that where active terrorist cells are domiciled, we can expect that the U.S. and other global anti-terrorist forces to come calling. Are we as a nation, willing to be the next theater for global anti-terrorist military campaigns? I hope not. This is more so, since images and memories of the Aleppo Governorate in Syria are still very fresh in our minds. If our government has knowledge or evidence, of foreign nations that are funding insurgency in Nigeria, or abetting local bandits, this is the time to come clean. Such nations must be publicly identified and challenged. 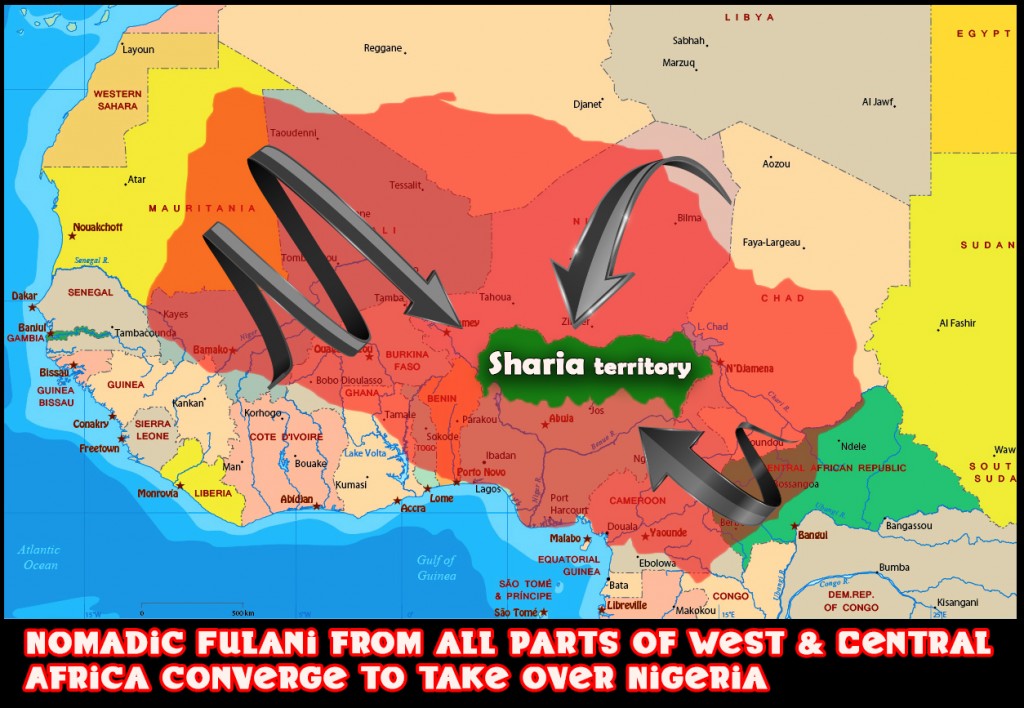 The nomadic Fulani cultural group is dispersed throughout West and Central Africa’s savanna and Sahel region. Nigeria is the group’s prime target for ethnic cleansing and land grab.

Security has, for long, been a joint responsibility of the state and people; but the primary responsibility to protect Nigerian citizens, as encapsulated in the 1999 Constitution, belongs to the state. But our governments – federal, state and local – have failed Nigerians collectively. The toll in human lives, loss of properties and productivity, is spiraling upward. Human insecurity, including food insecurity keeps creeping up. Small arms and light weapons are proliferating. Meanwhile, Nigerians are fast losing confidence in our statutory security arrangements. Thus, it seems the only option left to Nigerian citizens, is to resort to collective regional, community or individual self-defense. That reality is also manifesting as the clock ticks. Read differently: it means an ensuing state of anarchy!

In Nigeria, clear and present danger is lurking around. There is a time to speak and a time for silence. There is also a time to act. In the national interest, this is a time to speak up; and a time to act to save corporate Nigeria. Only a frank and selfless national dialogue on security and restructuring will save Nigeria. Shamefully, our leaders and most of the national elite across ethnic, religious and political divides have opted for taciturnity rather than speak truth to power. To paraphrase John Foster Dulles, such disposition is “immoral and opportunistic.” Such reticence is insidiously dangerous for an ill-at-ease and already disintegrating and dying Nigeria.